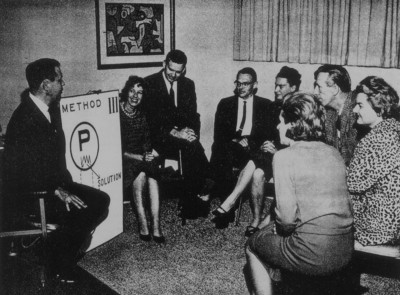 Thomas Gordon, a colleague of Carl Rogers, developed this model following his counselling work with teens who had been referred to him because of serious family conflicts - rows, fights, exclusions etc. He concluded that there was rarely a loss of feeling between parents and teens but huge frustration at how to talk productively about differing issues and behaviours.

His solution was to try and teach parents some of the skills that counsellors are trained in - how to listen effectively, give clear messages avoiding judgement, and how to implement a democratic problem-solving process.

The first course was a huge success and he was persuaded to write a book, which he called Parent Effectiveness Training.

P.E.T. is widely recognised as the first skill-based training programme for parents and has been extensively copied, adapted and borrowed from.

The Gordon Model has introduced many valuable concepts to the world:- Active Listening; the Behaviour Window; the 12 Roadblocks to Communication; I-Messages; Method lll Conflict Resolution.

This model was expanded and has revolutionised training, not only for parents but also for leaders, teachers, youth and individuals.

Thomas Gordon believed that few people were given the communication skills to successfully manage conflict in their lives and if this could be addressed, the world would ultimately benefit. He said that 'Democratic families are peaceful families and when there are enough peaceful families we will have a society that rejects violence and finds warfare unacceptable.'

Please click here to learn more about Thomas Gordon and the origin of his model.

Find out more details about P.E.T and other Gordon Courses available.

This site uses cookiesUsing this website means you're ok with this. Read more